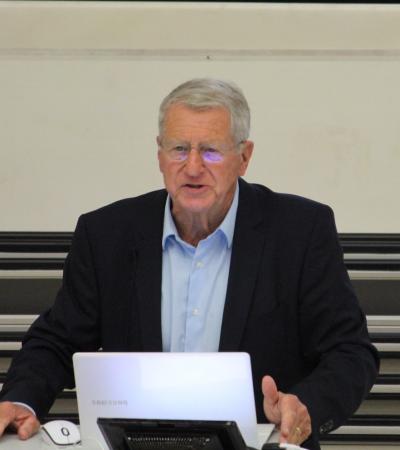 Professor of physics since 1984 and President of the University of Geneva between 1999 and 2003, he has contributed in particular to the institutional rapprochement between Swiss universities, the implementation of the Bologna Declaration and the foundation of the League of European Research Universities. He has served in the Research Council of the Swiss National Science Foundation and in several scientific committees. He has been Swiss delegate to the CERN Council and has served as President of CERN Council.

He has turned his scientific interests towards the detection of particles from space with the AMS project, first in the Space Shuttle Discovery from 1994 to 1998, and then on the International Space Station. This activity has required the implementation of a space qualified infrastructure as well as a research and technical team at the University of Geneva to build and test silicon tracking detectors. He has contributed to several organizations responsible for astroparticle physics coordination, such as the Astroparticle physics European Coordination (ApPEC). He presently represents Switzerland in the Astroparticle Physics International Forum (APIF).

As Professor emeritus, he has initiated applications of accelerator-based methods for medical applications and reduction of radioactive waste from nuclear power plants with a private company and with the international Thorium Energy Committee (iThEC).