The Alpha Magnetic Spectrometer (AMS) on the International Space Station (ISS) has new results on energetic cosmic-ray electrons and positrons based on the analysis of the first 41 billion events. These results provide a deeper understanding of the nature of high-energy cosmic rays and shed more light on the existence of dark matter.

Of the 41 billion primary cosmic-ray events analysed so far, 10 million have been identified as electrons and positrons. Using these, the AMS collaboration has measured the positron fraction (the ratio of the number of positrons to the combined number of positrons and electrons) in the energy range 0.5 to 500 GeV. We have observed that the energy at which the fraction starts to quickly increase is 8 GeV (see Figure 1) indicating the existence of a new source of positrons. 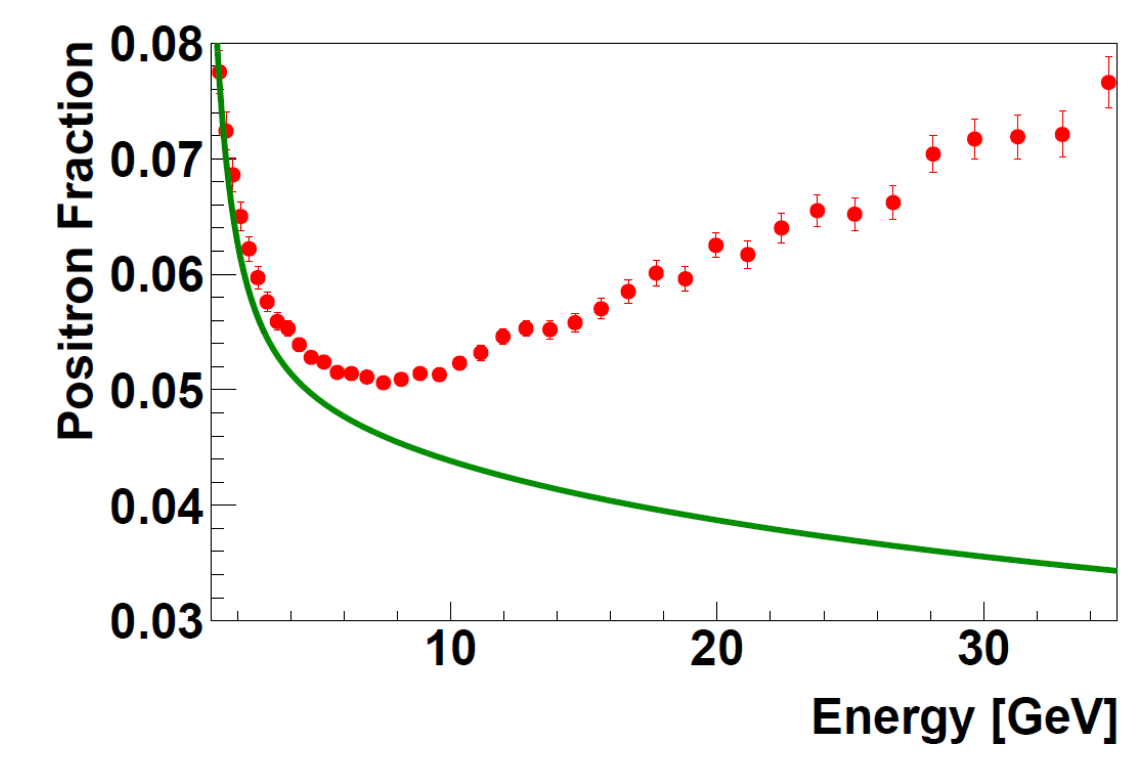 Figure 1. The positron fraction measured by AMS (red circles) compared with the expectation from the collision of ordinary cosmic rays showing that above 8 billion electron volts (8 GeV) the positron fraction begins to quickly increase. This increase indicates the existence new sources of positrons. 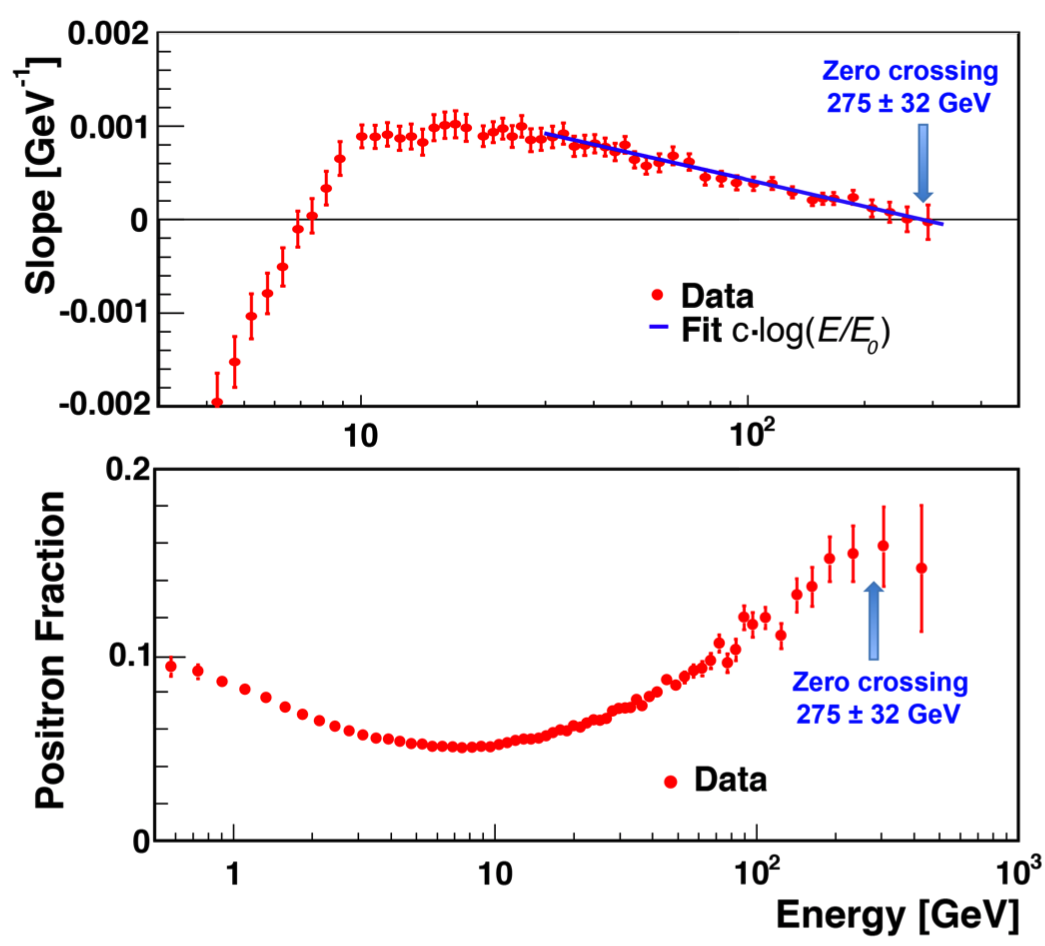 Figure 2. Upper plot shows the slope of positron fraction measured by AMS (red circles) and a straight line fit at the highest energies (blue line). The data show that at 275±32 GeV the slope crosses zero. Lower plot shows the measured positron fraction as function of energy as well as the location of the maximum. No sharp structures are observed. 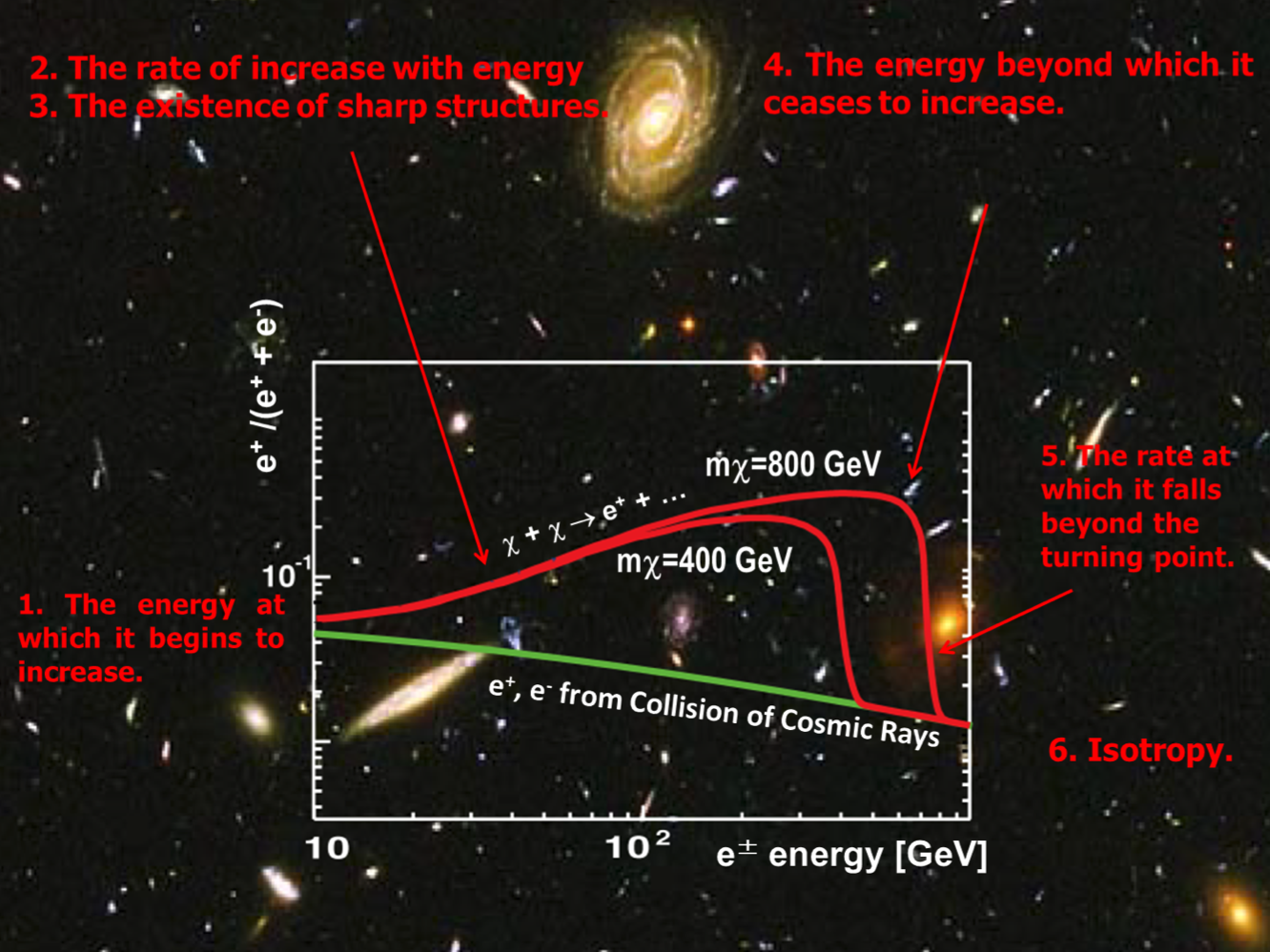 Figure 3. Illustration of the characteristic features of the positron fraction in cosmic rays.

The new results from AMS on the positron fraction published in Physical Review Letters show that items (1) - (4) highlighted in Figure 3 have been unambiguously resolved, yielding observations of a new phenomenon. They are consistent with a dark-matter particle (neutralino) of mass on the order of 1 TeV. To determine if the observed new phenomenon is from dark matter or from astrophysical sources such as pulsars, AMS is no making measurements to determine the rate of decrease at which the positron fraction falls beyond the turning point (item 5), as well as to determine the antiproton fraction (the ratio of antiprotons to protons plus anti-protons). These will be reported in future publications.

Secondly, AMS reports the precise measurements of the electron flux and the positron flux, i.e. the intensities of cosmic-ray electrons and positrons. These measurements show that the behaviours of electrons and positrons are significantly different from each other both in their magnitude and energy dependence. Figure 4 (upper plot) shows the electron and positron fluxes multiplied by the energy cubed (E3) for the purpose of presentation. The positron flux first increases (0.5 to 10 GeV), then levels out (10 to 30 GeV), and then increases again (30 to 200 GeV). Above 200 GeV, it has a tendency to decrease. This is totally different from the scaled electron flux.

The behaviour of the flux as a function of energy is described by the spectral index and the flux was expected to be proportional to energy E to the power of the spectral index. The result shows that neither flux can be described with a constant spectral index, see the lower plot in Figure 4. In particular, between 20 and 200 GeV, the rate of change of the positron flux is surprisingly higher than the rate for electrons. This is important proof that the excess seen in the positron fraction is due to a relative excess of high-energy positrons, as expected from dark-matter collisions, and not the loss of high-energy electrons. These results are published in Physical Review Letters in a separate article.

This new observation of the electron and positron fluxes also demonstrates, as pointed out by Michael S Turner, that there is a fundamental difference between matter (electrons) and antimatter (positrons). 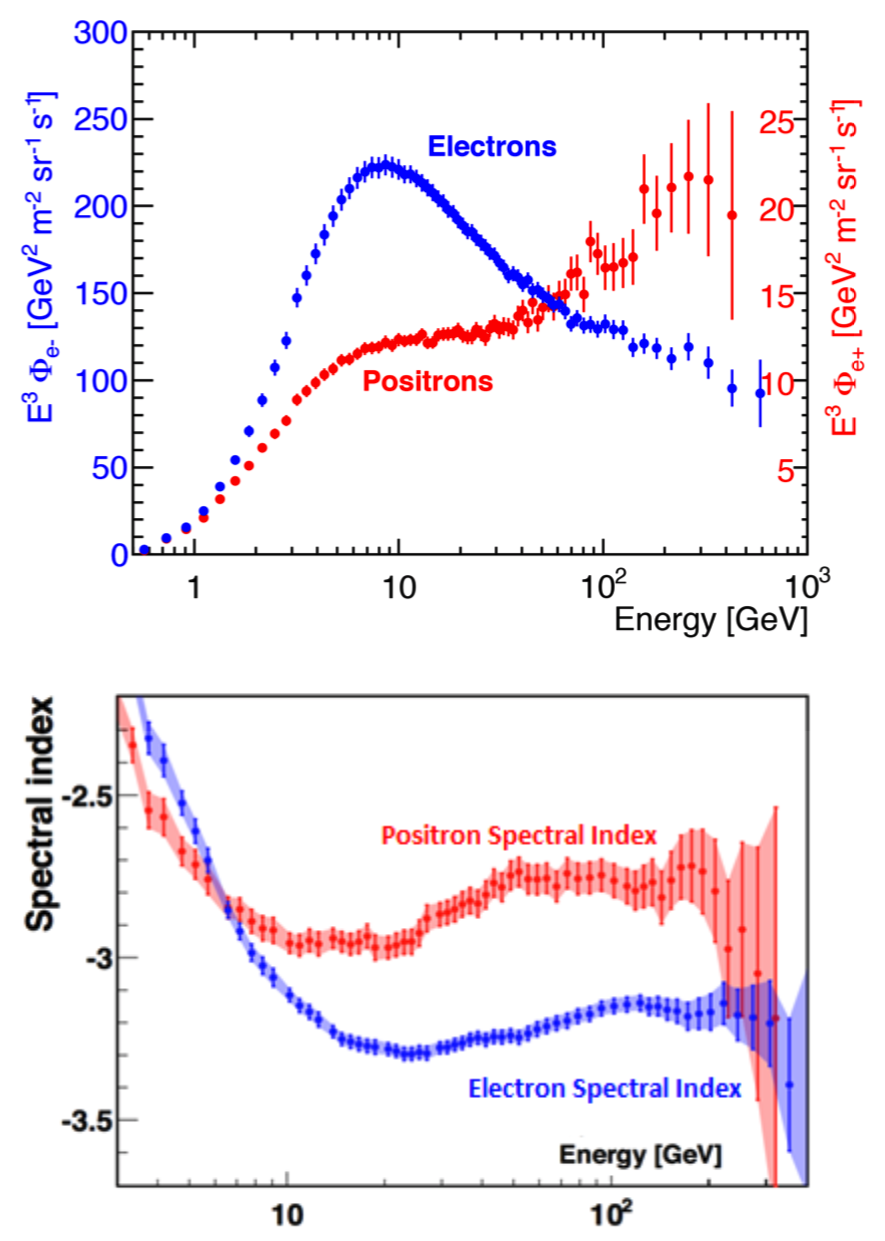 In 1932, Carl Anderson discovered the positron in cosmic rays. Non-magnetic detectors in space and on the ground can measure the flux of the sum of electrons plus positrons. Over the past 50 years, there have been many experiments that measured the combined flux of electrons plus positrons in cosmic rays. These measurements have yielded interesting results and few of them indicated the possible existence of a structure at 300-800 GeV.

AMS, being a particle-physics detector, provides many independent measurements of electrons, positrons, and electrons plus positrons. After collecting 41 billon cosmic ray events, AMS has been able to provide a measurement of the flux of electrons plus positrons, shown in Figure 5 (upper plot). The combined flux is smooth and reveals new and distinct information. Most interesting is the observation that, at high energies and over a wide energy range, the combined flux can be described by a single, constant spectral index (see Figure 5, lower plot). 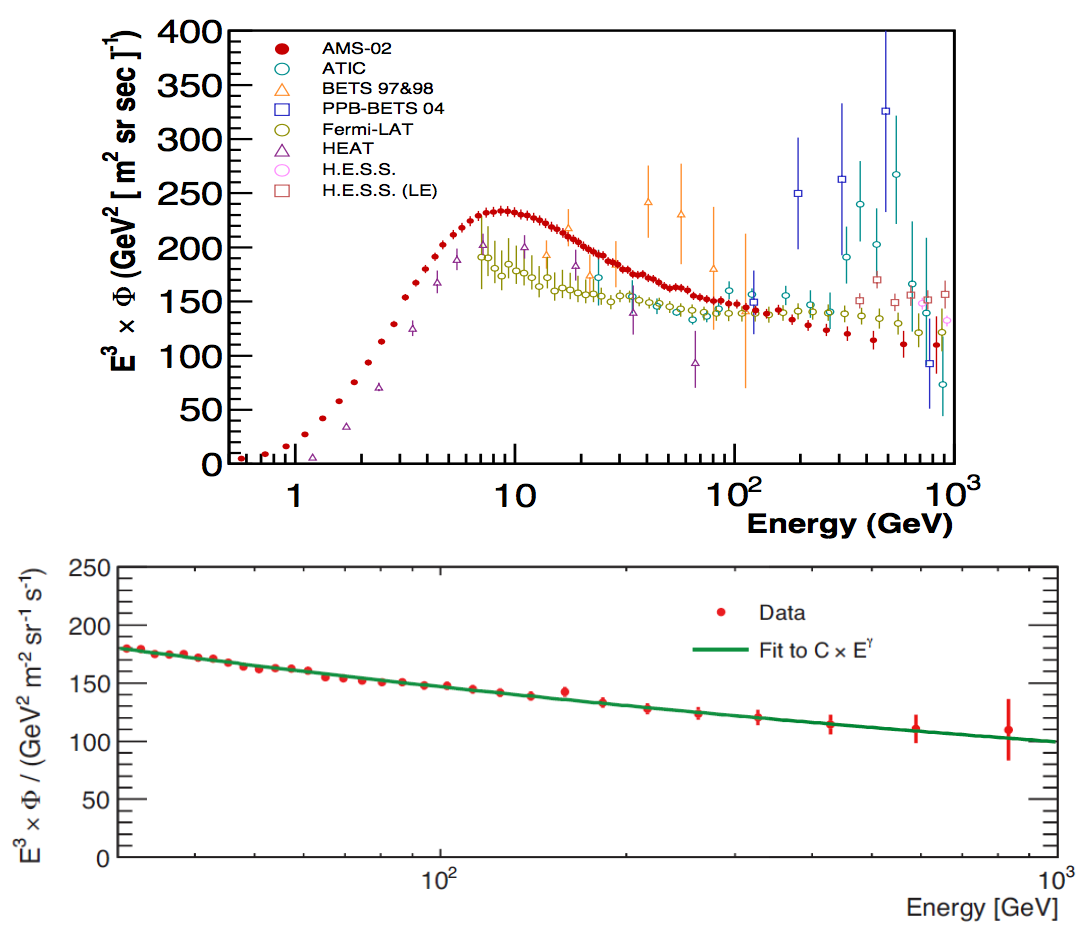 The precision measurements of the positron fraction, the individual fluxes and the combined flux are complementary to one to another. Together they will provide a deeper understanding of the origin of high-energy cosmic rays and shed more light on the existence of dark matter.

AMS was assembled and tested at the European Organization for Nuclear Research, CERN, Geneva, Switzerland. Detector components were constructed at universities and research institutes around the world. Fifteen countries from Europe, Asia, and America participated in the construction of AMS (Finland, France, Germany, Netherlands, Italy, Portugal, Spain, Switzerland, Turkey, China, Korea, Taiwan, Russia, Mexico and the United States). The Principal Investigator of AMS is Prof. Samuel Ting of MIT and CERN. AMS is a U.S. Department of Energy sponsored particle physics experiment on the ISS under a DOE- NASA Implementing Arrangement. The Collaboration works closely with the NASA AMS Project Management team from Johnson Space Center as it has throughout the entire process. AMS was launched by NASA to the ISS as the primary payload onboard the final mission of space shuttle Endeavour (STS-134) on May 16, 2011. Once installed on the ISS, AMS was powered up and immediately began collecting data from primary sources in space and these were transmitted to the AMS Payload Operations Control Centre (POCC). The POCC is located at CERN, Geneva, Switzerland.

After 40 months of operations in space, AMS has collected 54 billion cosmic ray events. To date 41 billion have been analysed. The data are analysed at the AMS Science Operations Centre (SOC) located at CERN as well as at AMS universities around the world. Over the lifetime of the space station, AMS is expected to measure hundreds of billions of primary cosmic rays. Among the physics objectives of AMS is the search for antimatter, dark matter, and the origin of cosmic rays. The collaboration will also conduct precision measurements on topics such as the boron to carbon ratio, nuclei and antimatter nuclei, and antiprotons, in addition to precision measurements of the helium flux, proton flux and photons and the search for new physics and astrophysics phenomena such as strangelets.

It is important to note that, in the search for an understanding of dark matter, there are three distinct approaches:

Production experiments, such as those being carried at the LHC with the ATLAS and CMS experiments, use particle collisions to produce dark-matter particles and detect their decay products. This is similar to experiments at Brookhaven, Fermilab, the CERN-SPS and CERN-LHC that led to the discovery of CP violation, the J particle, Z and W bosons, the b and t quarks, and the Higgs boson.

Annihilation experiments for dark matter are done in space and are based on the fact that dark-matter collisions can produce excesses of positrons and antiprotons. These are the main goals of AMS. On the ground, annihilation experiments are done in electron-positron colliders (SPEAR, PETRA, LEP, PEP-II, TRISTAN), leading to the discovery of the psi particle, the heavy electron (tau) and gluons, precision measurements of CP-violation effects and the properties of Z and W bosons.

The scattering experiments, the production experiments, and the annihilation experiments each produce unique physics discoveries. The absence of a dark-matter signal from one of these three ways does not exclude its discovery by the other two.

Germany made a major contribution to the detector construction and data analysis under the leadership of Professors Dr. Stefan Schael, Henning Gast, and Iris Gebauer. Germany’s participation is supported by DLR and RWTH Aachen.

Spain made a major contribution to the detector construction and currently to the data analysis under the leadership of Manuel Aguilar, Javier Berdugo, Jorge Casaus, Carlos Delgado and Carlos Mana. Spain’s participation is supported by CIEMAT and CDTI.

France has made major contributions to the detector construction and to the data analysis both from LPSC, Grenoble and LAPP, Annecy under the leadership of Professors Laurent Derome, Sylvie Rosier-Lees, and Jean-Pierre Vialle. France's participation is supported by IN2P3 and CNES.

Taiwan made a major contribution to the detector construction and currently to the data analysis, under the leadership of Academician Shih-Chang Lee and Profs. Y.H. Chang and S. Haino. Taiwan’s participation is supported by Academia Sinica, National Science Council and CSIST. Taiwan also maintains the AMS Asia POCC.