The Alpha Magnetic Spectrometer (AMS) Collaboration announces the publication of its first physics result in Physical Review Letters. The AMS Experiment is the most powerful and sensitive particle physics spectrometer ever deployed in space. As seen in Figure 1, AMS is located on the exterior of the International Space Station (ISS) and, since its installation on May 19, 2011 until the present, it has measured over 30 billion cosmic rays at energies up to trillions of electron volts. Its permanent magnet and array of precision particle detectors collect and identify charged cosmic rays passing through AMS from the far reaches of space. Over its long duration mission on the ISS, AMS will record signals from 16 billion cosmic rays every year and transmit them to Earth for analysis by the AMS Collaboration. This is the first of many physics results to be reported. 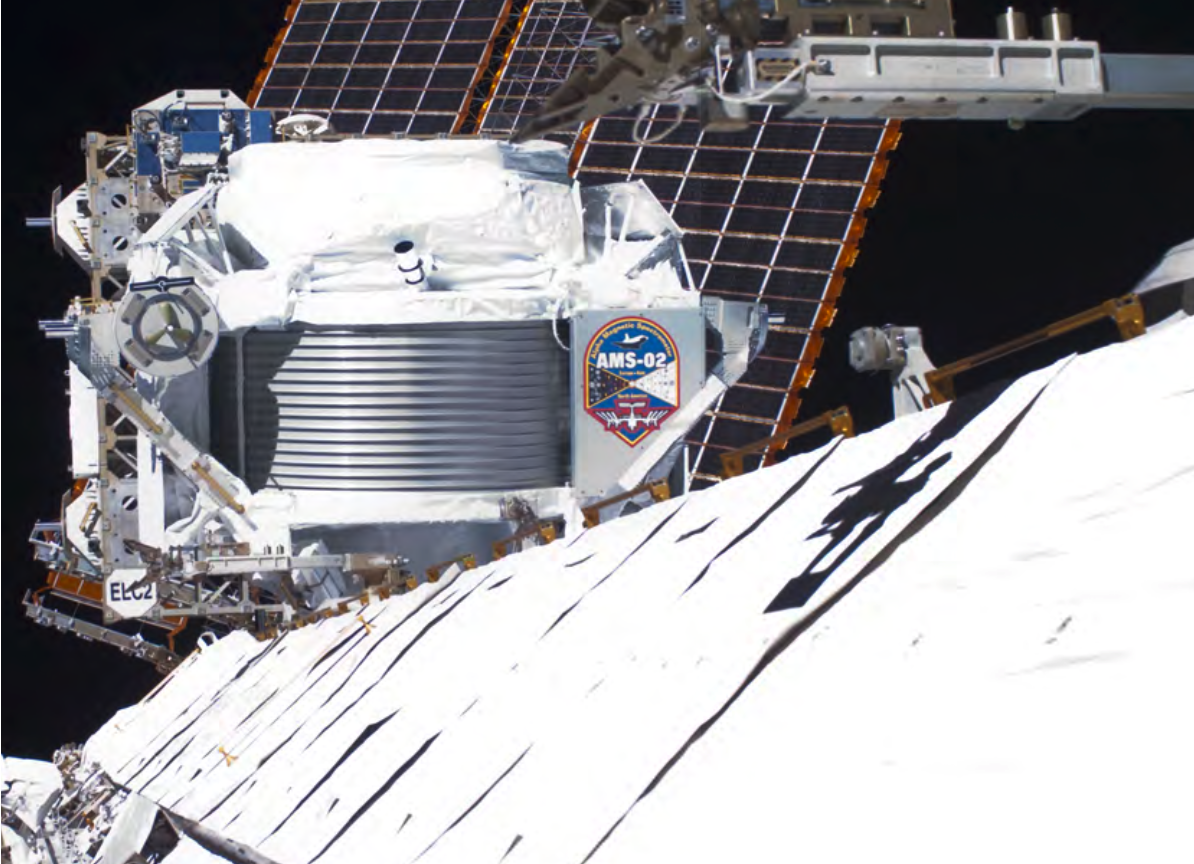 Figure 1: From its vantage point ~260 miles (~400 km) above the Earth, the Alpha Magnetic Spectrometer (AMS) collects data from primordial cosmic rays that traverse the detector.

In the initial 18 month period of space operations, from May 19, 2011 to December 10, 2012, AMS analyzed 25 billion primary cosmic ray events. Of these, an unprecedented number, 6.8 million, were unambiguously identified as electrons and their antimatter counterpart, positrons. The 6.8 million particles observed in the energy range 0.5 to 350 GeV are the subject of the precision study reported in this first paper.

Electrons and positrons are identified by the accurate and redundant measurements provided by the various AMS instruments against a large background of protons. Positrons are clearly distinguished from this background through the robust rejection power of AMS of more than one in one million. Currently, the total number of positrons identified by AMS, in excess of 400,000, is the largest number of energetic antimatter particles directly measured and analyzed from space. The present paper can be summarized as follows:

AMS has measured the positron fraction (ratio of the positron flux to the combined flux of positrons and electrons) in the energy range 0.5 to 350 GeV. We have observed that from 0.5 to 10 GeV, the fraction decreases with increasing energy. The fraction then increases steadily between 10 GeV to ~250 GeV. Yet the slope (rate of growth) of the positron fraction decreases by an order of magnitude from 20 to 250 GeV. At energies above 250 GeV, the spectrum appears to flatten but to study the behavior above 250 GeV requires more statistics – the data reported represents ~10% of the total expected. The positron fraction spectrum exhibits no structure nor time dependence. The positron to electron ratio shows no anisotropy indicating the energetic positrons are not coming from a preferred direction in space. Together, these features show evidence of a new physics phenomena.

Figure 2 illustrates the AMS data presented in the first publication. 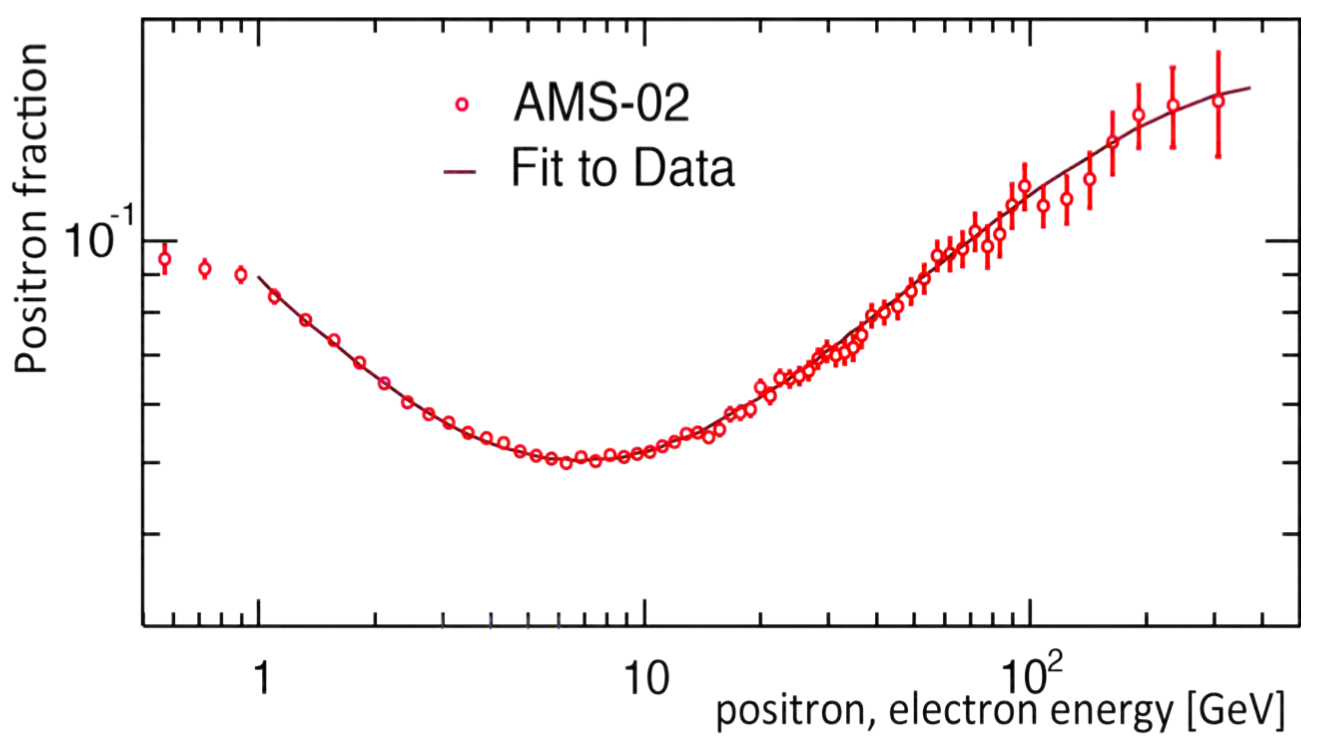 Figure 2: The positron fraction measured by AMS demonstrates excellent agreement with the model described below. Even with the high statistics, 6.8 million events, and accuracy of AMS, the fraction shows no fine structure.

The exact shape of the spectrum, as shown in Figure 2, extended to higher energies, will ultimately determine whether this spectrum originates from the collision of dark matter particles or from pulsars in the galaxy. The high level of accuracy of this data shows that AMS will soon resolve this issue.

Over the last few decades there has been much interest on the positron fraction from primary cosmic rays by both particle physicists and astrophysicists. The underlying reason for this interest is that by measuring the ratio between positrons and electrons and by studying the behavior of any excess across the energy spectrum, a better understanding of the origin of dark matter and other physics phenomena can be obtained.

The first AMS result has been analyzed using several phenomenological models, one of which is described in the paper and included in Figure 2. This model, with diffuse electron and positron components and a common source component, fits the AMS data surprisingly well. This agreement indicates that the positron fraction spectrum is consistent with electron positron fluxes each of which is the sum of its diffuse spectrum and a single energetic common source. In other words, a significant portion of the high-energy electrons and positrons originate from a common source.

AMS is a magnetic spectrometer with the ability to explore new physics because of its precision, statistics, energy range, capability to identify different particles and nuclei and its long duration in space. As shown in Figure 3, the accuracy of AMS and the high statistics available distinguish the reported positron fraction spectrum from earlier experiments.

It is expected that hundreds of billions of cosmic rays will be measured by AMS throughout the lifetime of the Space Station. The volume of raw data requires a massive analysis effort. The parameters of each signal collected are meticulously reconstructed, characterized and archived before they undergo analysis by multiple independent groups of AMS physicists thus ensuring the accuracy of the physics results. 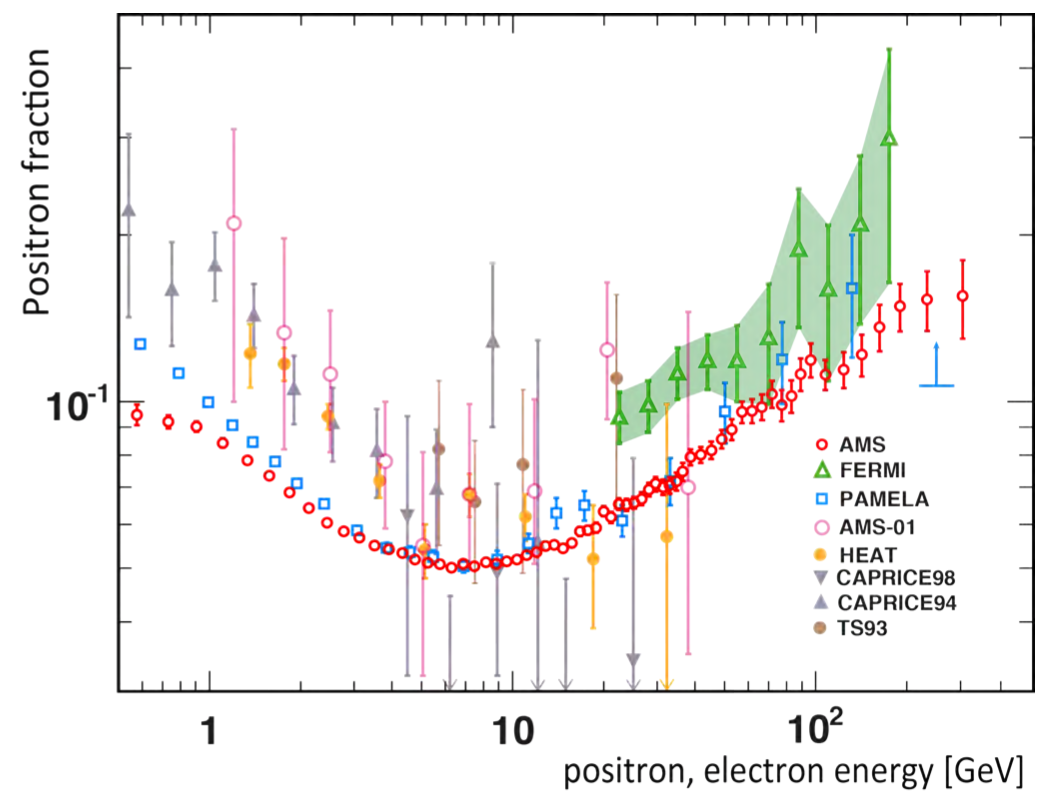 Figure 3: A comparison of AMS results with recent published measurements. With its magnet and precision particle detectors, high accuracy and statistics, the first result of AMS, based on only ~10% of the total data expected, is clearly distinguished from earlier experiments (see References).

The first publication from the AMS Experiment is a major milestone for the AMS international collaboration. Hundreds of scientists, engineers, technicians and students from all over the world have worked together for over 18 years to make AMS a reality. The collaboration represents 16 countries from Europe, Asia and North America (Finland, France, Germany, Italy, the Netherlands, Portugal, Spain, Switzerland, Romania, Russia, Turkey, China, Korea, Taiwan, Mexico and the United States) under the leadership of Nobel Laureate Samuel Ting of M.I.T. The collaboration continues to work closely with the excellent NASA AMS Project Management team from Johnson Space Center as it has throughout the entire process.

Many countries made important contributions contributions to the detector construction and presently to the data analysis. These include:

Italy, under the leadership of Professor Roberto Battiston, AMS deputy spokesperson, of University and INFN-TIFPA, Trento, with the support of INFN and ASI.

Germany, under the leadership of Professor Stefan Schael with the support of DRL and RWTH Aachen

France under the leadership of Professor Sylvie Rosier - Lees with the support of CNRS, IN2P3 and CNES.

Taiwan under the leadership of Academician Shi-chang Lee, supported by the Academia Sinica, the National Science Council and CSIST.

Switzerland under the leadership of Professor Martin Pohl of the University of Geneva, supported by SNSF.

AMS is a U.S. Department of Energy sponsored particle physics experiment on the ISS under a DOE-NASA Implementing Arrangement. AMS was constructed at universities and research institutes around the world and assembled at the European Organization for Nuclear Research, CERN, Geneva, Switzerland. It was transported to the Kennedy Space Center in August 2010 onboard a special C-5M transport aircraft of the U.S. Air Force Air Mobility Command. AMS was launched by NASA to the ISS as the primary payload onboard the final mission of space shuttle Endeavour (STS-134) on May 16, 2011. The crew of STS-134, Greg Johnson, Mike Fincke, Greg Chamitoff, Drew Feustel, Roberto Vittori under the command of Mark Kelly, successfully deployed AMS as an external attachment on the U.S. ISS National Laboratory on May 19, 2011. Once installed, AMS was powered up and immediately began collecting data from primary sources in space and these were transmitted to the AMS Payload Operations Control Center (POCC). The POCC is located at CERN, Geneva, Switzerland.

Once AMS became operational, the first task for the AMS Collaboration was to ensure that all instruments and systems performed as designed and as tested on the ground. The AMS detector, with its multiple redundancies, has proven to perform flawlessly in space. Over the last twenty-two months in flight, AMS collaborators have gained invaluable operational experience in running a precision spectrometer in space and mitigating the hazardous conditions to which AMS is exposed as it orbits the Earth every 90 minutes. These are conditions that are not encountered by ground-based accelerator experiments or satellite-based experiments and require constant vigilance in order to avoid irreparable damage. These include the extreme thermal variations caused by solar effects and the re-positioning of ISS onboard radiators and solar arrays. In addition, the AMS operators regularly transmit software updates from the AMS POCC at CERN to the AMS computers in space in order to match the regular upgrades of the ISS software and hardware.

With the wealth of data emitted by primary cosmic rays passing through AMS, the Collaboration will also explore other topics such as the precision measurements of the boron to carbon ratio, nuclei and antimatter nuclei, precision measurements of the helium flux, proton flux and photons, as well as the search for new physics and astrophysics phenomena such as strangelets.

The AMS Collaboration will provide new, accurate information over the lifetime of the Space Station as the AMS detector continues its mission to explore new physics phenomena in the cosmos (as seen in Figure 4). 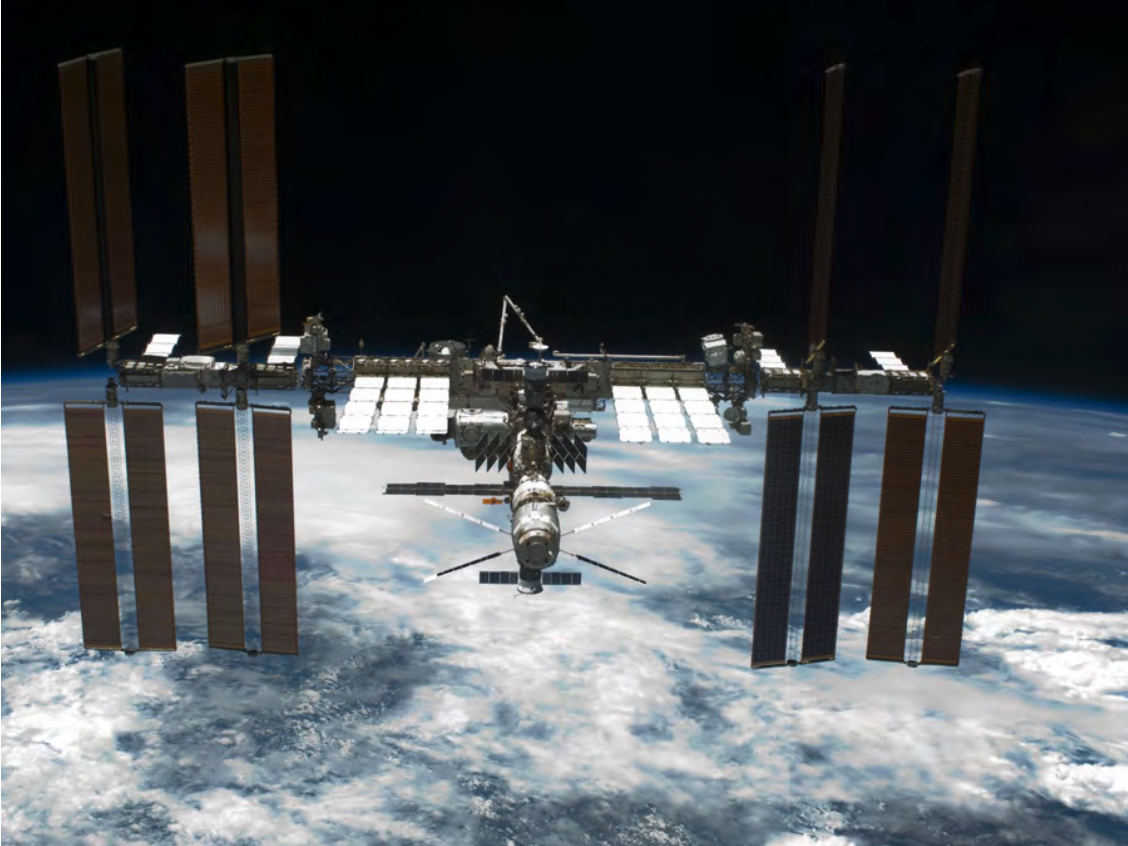 Figure 4: The International Space Station provides a unique platform for the AMS detector that is charting a new realm of fundamental physics research not possible to achieve on Earth. All primary charged particles and high energy gamma rays are absorbed by the Earth’s atmosphere. AMS is currently the only precision magnetic spectrometer which will stay on ISS for its lifetime.