Unlocking the Secrets of the Cosmos: The First Five years of AMS on the International Space Station

The Alpha Magnetic Spectrometer (AMS) Collaboration announces the fifth anniversary of the AMS Experiment on the International Space Station (ISS) and summarizes its major scientific results to date.

The AMS Experiment (shown in Figure 1) is the most sensitive particle detector ever deployed in space and is exploring a new and exciting frontier in physics research. As a magnetic spectrometer, AMS is unique in physics research as it studies charged particles and nuclei in the cosmos before they are annihilated in the Earth’s atmosphere. The improvement in accuracy over previous measurements is made possible through its long duration time in space, large acceptance, built in redundant systems and its thorough calibration in the CERN test beam. These features enable AMS to analyze the data to an accuracy of ~1%. The first five years of data from AMS on the International Space Station are beginning to unlock the secrets of the cosmos. 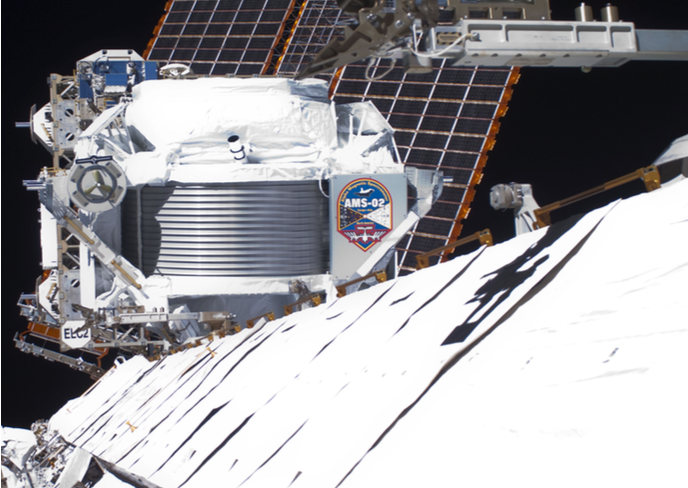 Figure 1. From its vantage point ~240 miles (400 km) above the Earth, the Alpha Magnetic Spectrometer (AMS) collects data from passing cosmic rays from primordial sources in the universe before they pass through the Earth’s atmosphere.

Since its installation on the ISS in May 2011, AMS has collected data from more than 90 billion cosmic rays with up to multi-TeV energies and published its major physics results in Physical Review Letters (Appendix I).

A note about cosmic rays: As the products of exploding supernovae, primary cosmic rays can travel for millions of years in the galaxy before reaching AMS. Secondary cosmic rays come from the interaction of primary cosmic rays with the interstellar media. Uniquely positioned on the International Space Station, AMS studies cosmic rays passing through its precision detectors, shown in Appendix II, to define the charge, energy, and momentum of the passing particles in order to obtain an understanding of dark matter, the existence of complex antimatter in space, the properties of primary and secondary cosmic rays as well as new, unexpected phenomena. These are among the fundamental issues in modern physics. Appendix III contains a brief summary of AMS for reference.

There are hundreds of different kinds of charged elementary particles. Only four of them – electrons, protons, positrons and antiprotons – have infinite lifetimes so they can travel through the cosmos forever. Electrons and positrons have much smaller mass than protons and antiprotons so they lose much more energy in the galactic magnetic field due to synchrotron radiation.

As shown in Figure 2, AMS has observed that the electron flux and positron flux display different behaviors both in their magnitude and in their energy dependence. 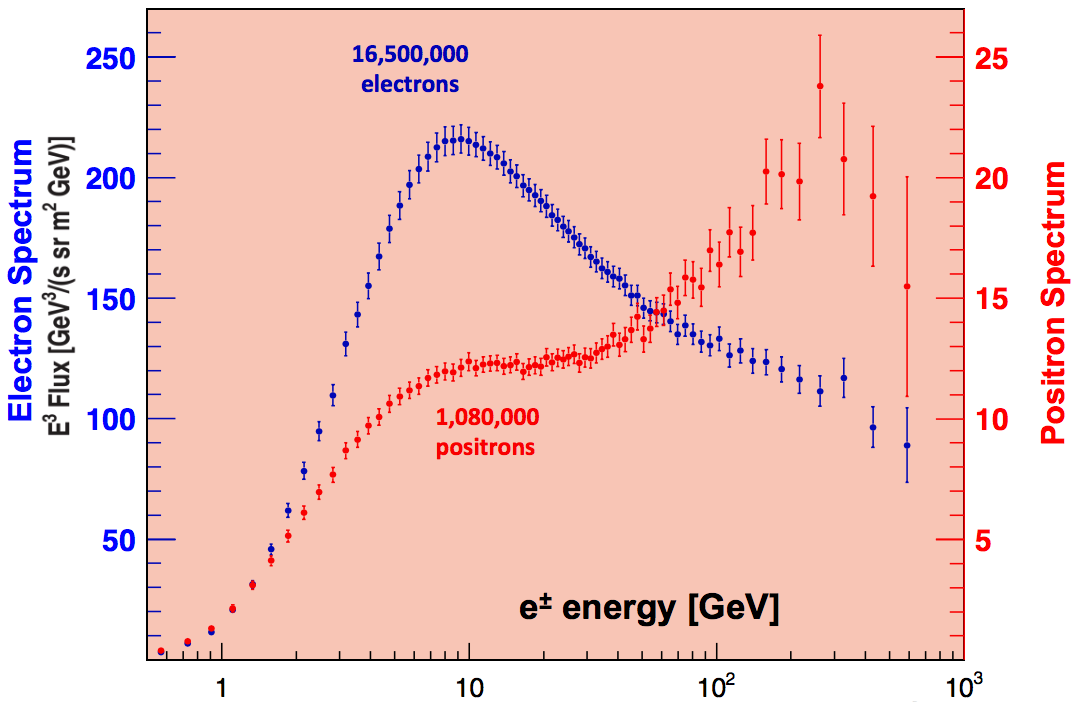 Figure 2. The electron flux and the positron flux are different in their magnitude and energy dependence.

Most surprisingly, from 60 to 500 GeV, positrons, protons and antiprotons display identical momentum dependence but electrons exhibit a totally different dependence as shown in Figure 3. The reason that this observation is surprising is that both electrons and positrons lose energy (or momentum) equally when travelling through the galactic magnetic field and at a much higher rate than protons or antiprotons. 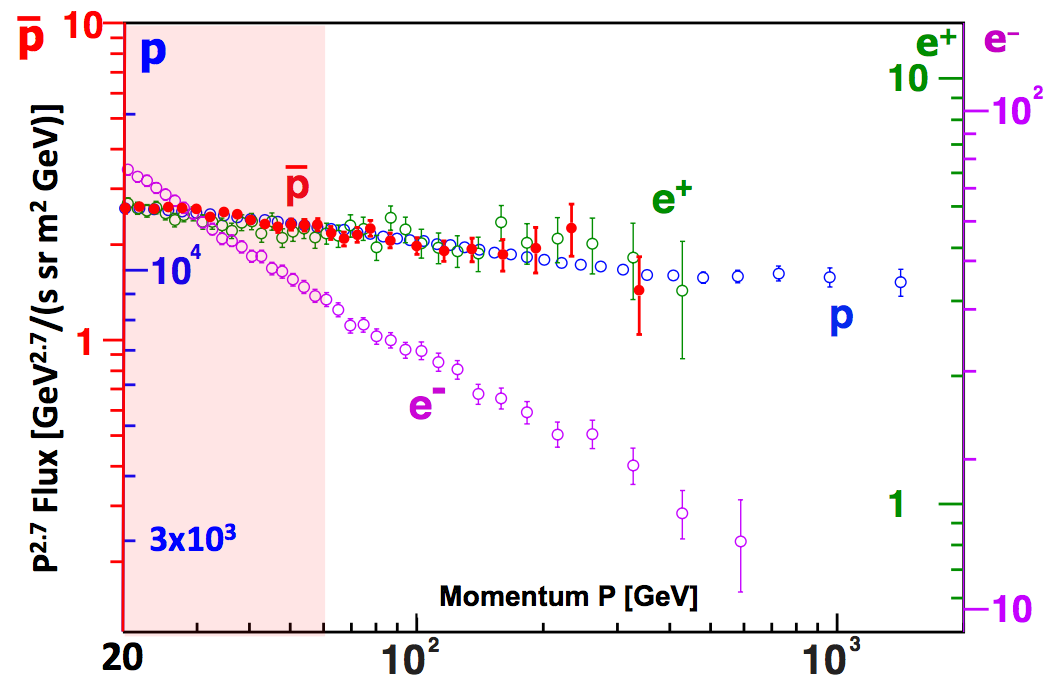 Figure 3. The positron, proton, and antiproton spectra have identical momentum dependence from 60 to 500 GeV. The electron spectrum exhibits a totally different behavior, it decreases much more rapidly with increasing momentum.

Figure 4 shows the latest results from AMS on the positron flux. As seen from the figure, after rising from 8 GeV above the rate expected from cosmic ray collisions, the spectrum exhibits a sharp drop off at high energies in excellent agreement with the dark matter model predictions with a mass of ~1 TeV. There is great interest in the physics community on the AMS measurements of elementary particles. For example, an alternative speculation for positron spectrum is that this rise and drop off may come from new astrophysical phenomena such as pulsars. 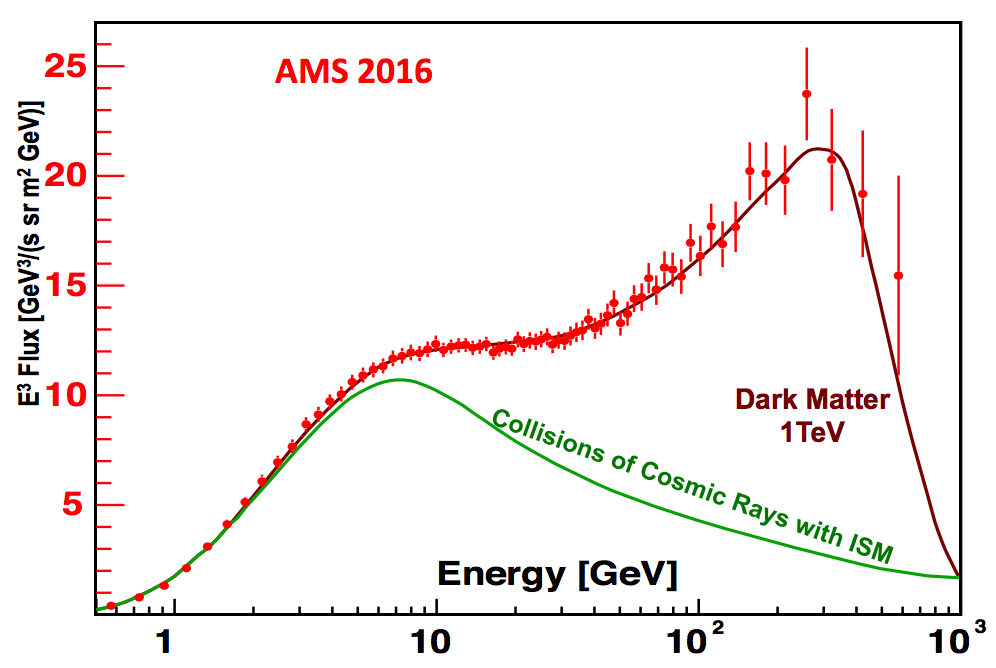 AMS has also studied the antiproton to proton ratio. The excess in antiprotons observed by AMS cannot easily be explained as coming from pulsars but can be explained by dark matter collisions or by other new astrophysics models. Antiprotons are very rare in the cosmos. There is only one antiproton in 10,000 protons therefore a precision experiment requires a background rejection close to 1 in a million. It has taken AMS five years of operations to obtain a clean sample of 349,000 antiprotons. Of these, AMS has identified 2200 antiprotons with energies above 100 billion electron volts. Experimental data on cosmic ray antiprotons are crucial for understanding the origin of antiprotons in the cosmos and for providing insight into new physics phenomena.

AMS contains seven instruments (shown in Appendix II) with which to independently identify different elementary particles as well as nuclei. Helium, lithium, carbon, oxygen and heavier nuclei up to iron have been studied by AMS. It is believed that helium, carbon and oxygen were produced directly from primary sources in supernova remnants whereas lithium, beryllium and boron are believed to be produced from the collision of primary cosmic rays with the interstellar medium. Primary cosmic rays carry information about their original spectra and propagation, and secondary cosmic rays carry information about the propagation of primary and secondary cosmic rays and the interstellar medium.

Helium is the second most abundant cosmic ray. Helium has been studied over the past century. Although lithium is a secondary cosmic ray, its spectrum behaves similarly to protons and helium in that none of the three fluxes can be described by a single power law and they do change their behavior at the same energy.

Since protons, helium, carbon and oxygen are primary cosmic rays and produced at the same sources; thus their flux ratios should be rigidity independent. Rigidity is momentum per unit charge and is the metric by which magnetic fields, such as those experienced by cosmic rays between their origin and AMS, act on charged particles. From the AMS measurements, for carbon-to-helium and for carbon-to-oxygen these ratios are, indeed, independent of rigidity, i.e., flat, as expected. Unexpectedly, the proton-to-helium flux ratio drops quickly but smoothly with rigidity.

Other secondary cosmic rays being measured by AMS include boron and beryllium. The unstable isotope of beryllium, 10Be, has a half-life of 1.5 million years and decays into boron. The Be/B ratio therefore increases with energy due to time dilation when the Be approaches the speed of light. Hence, the ratio of beryllium to boron provides information on the age of the cosmic rays in the galaxy. From this, AMS has determined that the age of cosmic rays in the galaxy is ~12 million years.

The flux ratio between secondary cosmic rays (boron) and primary cosmic rays (carbon) provides information on propagation and the average amount of interstellar material (ISM) through which the cosmic rays travel in the galaxy. Cosmic ray propagation is commonly modeled as a fast moving gas diffusing through a magnetized plasma. Various models of the magnetized plasma predict different behavior of the boron-to-carbon (B/C) flux ratio. Remarkably, above 65 GeV, the B/C ratio measured by AMS is well described by a single power law B/C= kRδ with δ = -0.333±0.015. This is in agreement with the Kolmogorov turbulence model of magnetized plasma where δ = -1/3 asymptotically. Of equal importance, the B/C ratio does not show any significant structures in contrast to many cosmic ray models.

The Big Bang origin of the Universe requires that matter and antimatter be equally abundant at the very hot beginning of the universe. The search for the explanation for the absence of antimatter in a complex form is known as Baryogenesis. Baryogenesis requires both a strong symmetry breaking and a finite proton lifetime. Despite the outstanding experimental efforts over many years, no evidence of strong symmetry breaking nor of proton decay have been found. Therefore, the observation of a single anti-helium event in cosmic rays is of great importance.

In five years, AMS has collected 3.7 billion helium events (charge Z = +2). To date we have observed a few Z = -2 events with mass around 3He. At a rate of approximately one antihelium candidate per year and a required signal (antihelium candidates) to background (helium) rejection of one in a billion, a detailed understanding of the instrument is required. In the coming years, with more data, one of our main efforts is to ascertain the origin of the Z = -2 events.

In five years, AMS on the ISS has recorded more than 90 billion cosmic ray events. The latest AMS measurements of the positron spectrum and positron fraction, the antiproton/proton ratio, the behavior of the fluxes of electrons, positrons, protons, helium and other nuclei provide precise and unexpected information on the production, acceleration and propagation of cosmic rays. The accuracy and characteristics of the data, simultaneously from many different types of cosmic rays require the development of a comprehensive model. In the coming years, with more data, one of our main efforts is to ascertain the origin of the Z = -2 events.

Most importantly, AMS will continue to collect and analyze data for the lifetime of the Space Station. As the results to date have demonstrated, whenever a precision instrument such as AMS is used to explore the unknown, new and exciting discoveries can be expected.